GAF currently completed an ESA funded project to support the African Mineral Geoscience Initiative (AMGI). The World Bank initiated AMGI Project is a pan-African initiative for the collection, consolidation, interpretation and effective dissemination of national and regional geological, geochemical, geophysical and mineral resource data through a geo-portal. It intends to develop a complete Geological Data Catalogue for entire Africa in relation to mineral resources.

One objective of this project was to test new public available Sentinel data and other satellite data (optical, radar and DEM) to produce improved geological maps in various climate zones and geologic settings; the envisaged scale was 1 : 50.000 and 1 : 25.000.

In this frame, GAF developed also automatized workflows for hydrothermal mineral mapping and standardized attribution schemes based on Sentinel and other satellite data in the four demonstration areas. The satellite-derived maps are integrated in a common database with geo-scientific ancillary data for a synoptic interpretation.

This project successfully demonstrates on how to map large areas in a fast, efficient and area wide mode. The approach is of particular interest for regional geological surveys as well as for mineral exploration. The results will fuel the geological information catalogue for Africa and provide an important input to AMGI, which seeks the improved information access for governments, mineral stakeholders, and more generally for planners and natural resource managers - thus becoming an enabler for future investments in Africa. The project is funded by the European Space Agency (ESA).

Task Team Leader of the AMGI Project Francisco Igualada concluded: “In the context of the AMGI project, satellite Earth Observation (EO) data and derived products have been identified as one of the major source of information especially for newly/improved geological mapping. The results of the project successfully demonstrated that satellite imagery combined with existing geo- scientific data of geophysical nature is a fast, effective and efficient mode to support the interpretation and final production of geological maps in all scales that are relevant for mineral exploration – from low scale reconnaissance mapping to a detailed survey”. 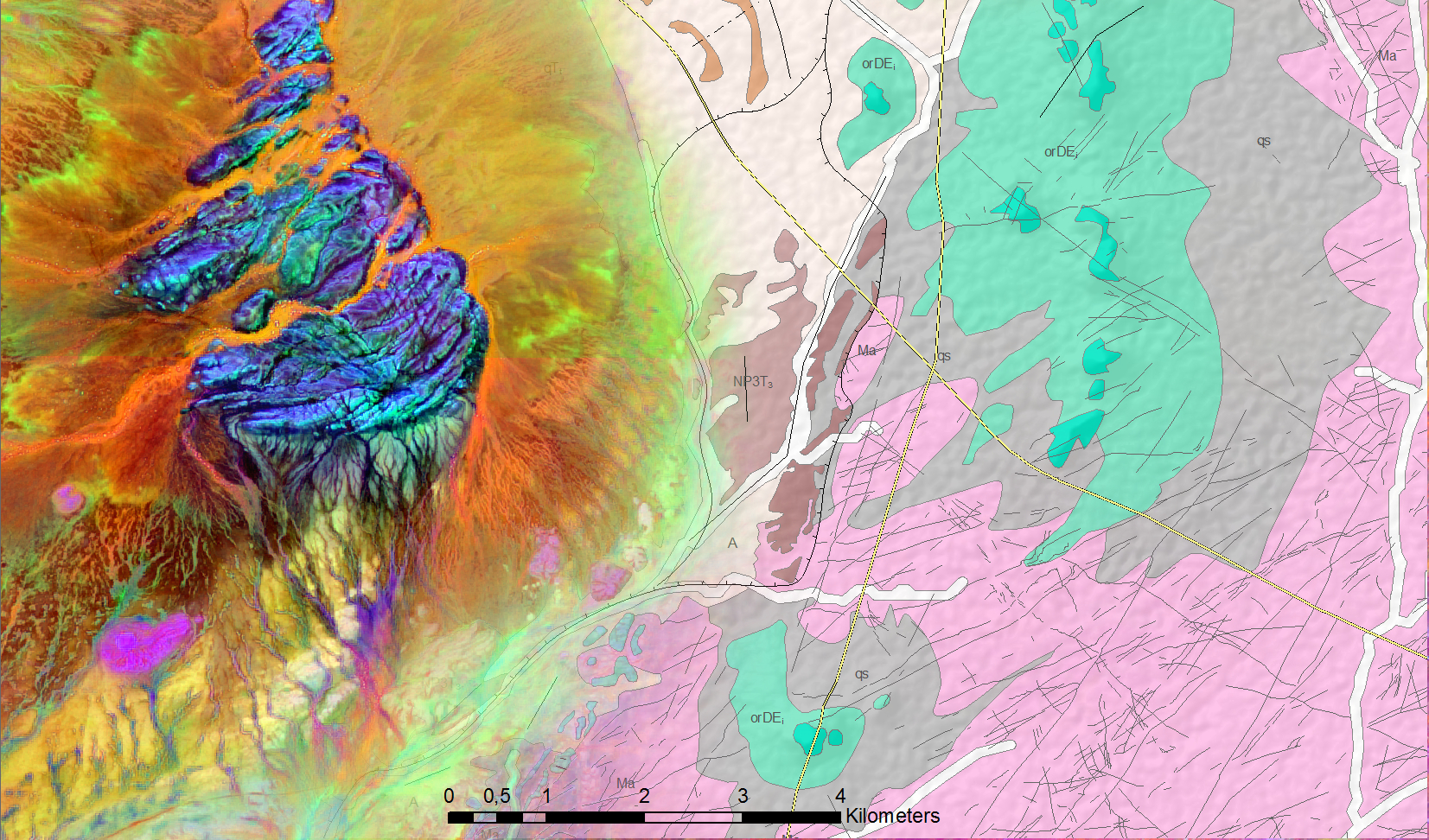 On the left side: Sentinel-2 principal component analyses shows a hydrothermal altered basement outcrop covered by sand sheets. The Geological map on the right side is highlighting the dyke swarm (black lines) cutting the basement (pink) and covered by Ordovician sediments (green and dark brown). Produced using modified Copernicus Sentinel data of 2016 and 2017.

The views expressed herein can in no way be taken to reflect the official opinion of the European Space Agency.