GAF, together with the Department of Geology at the University of Witwatersrand, identified an impact structure in Brazil on Landsat MSS satellite imagery in the year 2000.

The circular structure, which has a diameter of approximately 10km, was identified near Gilbués , in the Province of Piauí in north-eastern Brazil. GAF was at that time involved as satellite remote sensing and geo-information consultant in the German- Brazilian WAVES research project, which focused on water availability and the vulnerability of ecosystems and society in the dry north-eastern provinces of Brazil. Recent fieldwork and the observation of shatter cones and other high-pressure deformation features have now confirmed the impact origin : the "Santa Marta" structure thus becomes Brazil's sixth officially recognised crater and is now listed as one of the 184 confirmed impact structures on Earth. 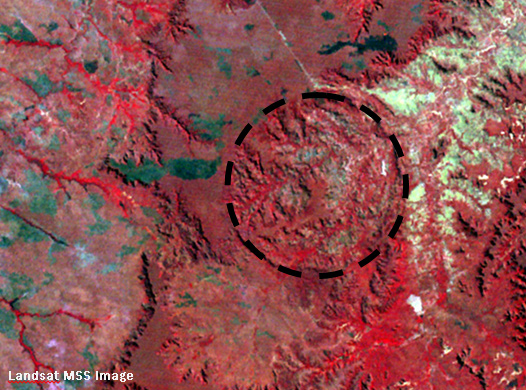