Perfect Reference in x, y and z for Europe

The Indian Cartosat-1 (IRS-P5) is currently the only operational optical stereoscopic satellite system in orbit. Its fixed mounted stereo camera is acquiring 2.5 m stereo data and is forming an ideal basis for digital surface models and resulting optical reference systems.GAF AG has developed in close co-operation with the German Aerospace Center (DLR) a highly automated processing chain, and generated ortho-images and digital elevation models based on Cartosat-1 data for several millions of square kilometres for satisfied customers.The outstanding and unmatched Cartosat 1 coverage with up to 15 overlapping stereo pairs is the basis for a highly reliable product.

A perfectly homogenous 3D reference layer for Europe will be available in early 2018!

A seamless 2.5 m resolution panchromatic ortho image layer, based on the near-nadir image, has been generated fully automatically in 2017 and is already available for most of the EEA39 countries.Combined with the Euro-Maps 3D DSM or the Euro Maps 3D Basic DEM for Ortho, which will both be available in early 2018, this will form a strong and unrivalled database for many transnational applications.Euro-Maps 3D DSM has 5 m resolution and a relative vertical accuracy of < 3 m LE90, whereas Euro-Maps 3D Basic DEM for Ortho is a blend of DTM for urban areas and DSM with 10 m resolution that is optimized for orthorectification purposes of HR- and VHR optical and radar images. 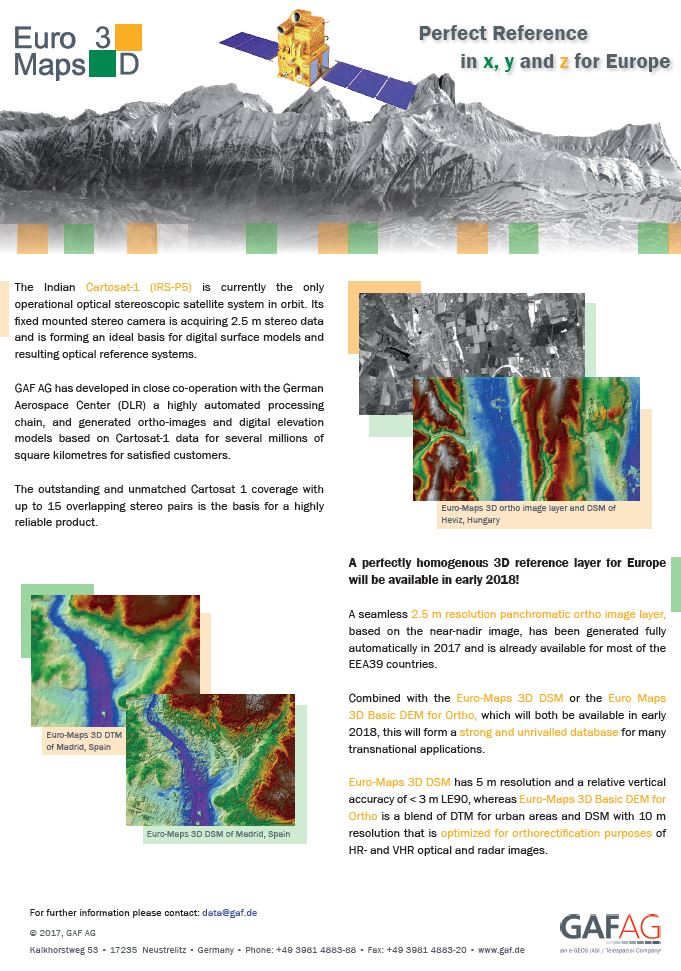